Note: The TWO videos are lower down the page. My comments are first, followed by the video, then points by people much smarter than me. And don’t miss the links to other pages with great content about traveling (not driving)!

It is worth researching if the driver’s license is only for people being paid to transport / traffic other people or goods.

The old and common definition for the word ‘driver‘ was someone who drove a wealthy man/woman around all day. Like so many subtle deceptions, we have been taught that a man/woman operating a car is always a driver, whereas the truth may be that the man/woman is a traveler using a car.

Now it’s gets trickier because the car transforms into a ‘vehicle’ if it was possibly purchased with Federal Reserve Bank notes or if the car is being used by a ‘driver’. There’s more to learn. But the basic premise is that no entity, in the states united, can forbid someone from traveling in a car.

The word ‘traffic’ is in a ‘traffic stop‘. Traffic means to move goods, as in a drug trafficking. If someone in a costume pulls thou over and claims thou made a traffic violation, thou might want to ask him/her to prove it. They are pretending thou is engaged in commerce and unless thou refutes it, thou will be liable for the rules around trafficking. Don’t stand under / under stand their point. Don’t agree that thou is trafficking.

And thou is not moving between ports! as in trans – ports.

Here are details from someone named Jaro:

Driver’s license is for DRIVING, which is a COMMERCIAL activity. And the use of a car purchased with lawful money, which is NOT for profit, is NOT commercial activity, and thusly does NOT require any license.

You just gotta use counter-claim in Equity in court to assert that, or otherwise avoid admitting that you’re the statutory person/defendant.

Here’s a video about traveling. Note the officer asks for things, but does not demand them. The officer is required to ask, but no one is obliged to provide.

“Pulled over for the third time in 8+ months and still traveling freely and this time VERIFIED the right to travel as i am WELL WITHIN THEM(my rights) to do what i’m doing. This video takes place after i have already handed him my paperwork and he has handed it back stating, “Hold tight for a minute,” and has returned to his patrol car already. As you can clearly see this isn’t some setup, i just had barely picked up my wife off of work and in fact, this officer followed me across Main Street while on Vine Street and didn’t pull me over when i pulled to the side to pick up my wife, he went on and turned down 100 West going North. We decided to go get gas first off so we turned down 100 West to goto Chevron that was down on 500 North. Low and behold he was sitting off to the side flipped around already waiting for me to continue down Vine Street, instead he flipped around behind us as soon as we passed him. No traffic violations ever happened at any point and he finally initiated the stop at the end of the street, actually in front of one my friends places. But he got what information he needed and honored his oath letting me continue to travel. He did use his emergency lights on me, but I don’t expect all cops/people/anyone to understand this as it is not the norm and we are not taught that we have an option. Travel safely my friends.” – Brian Schaff

Living in the Private

Brief Traffic Stop
“Is this a criminal investigation?”

If the answer is “No” you have established that the officer is not serving as a “Peace Officer” investigating, with “articulable probable cause”, an alleged crime against a potential or actual living injured party. 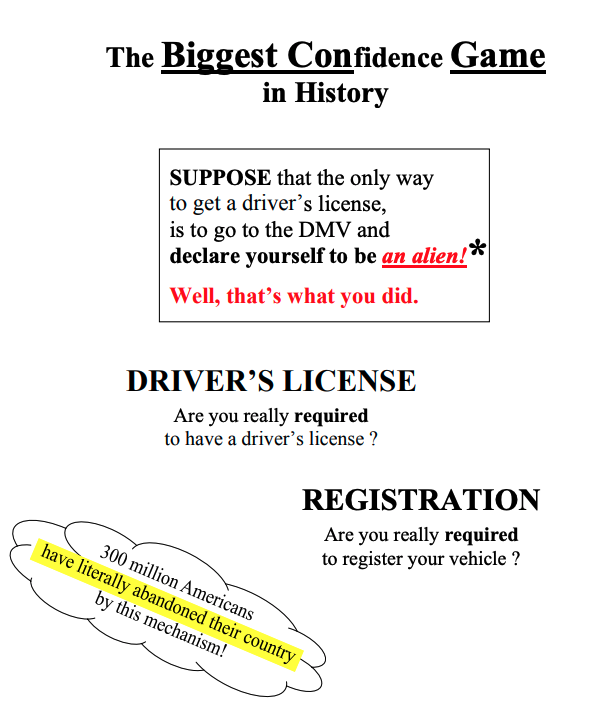 The short answers from the Nevada Revised Statutes are …

YES, a license is required IF YOU OPERATE a vehicle that is making a “use of the highways … in a gainful occupation thereon”.

So, Reader, are YOU out there making money by your use of the public highways? THEN you need a license as a “driver” for that use, but not any other use. If you are NOT making money, then you don’t need a license.***

YES, registration is required IF YOU OWN a vehicle that is making a “use of the highways by vehicles in a gainful occupation thereon”.

So, are you the OWNER of a vehicle that is out there making money by its use of the public highways? THEN that vehicle must be registered, for that use, but not any other use. If you are NOT making money, then your vehicle is not required to be registered.***

In fact, the NRS include this EXEMPTION, quote: “the provisions of [the statutes] do not apply to: … Any person engages in transporting the person’s own personal effects in the person’s own vehicle.”

*** Keep in mind that you or your vehicle could be involved in “gainful occupation” in one hour, but not in the next hour (or all the rest of your life).

OH! But there IS one class of person that CAN be required to get driver’s licenses and CAN be required to register their vehicles, purely because of their political status and without regard to “use”. They are called “residents”.

We will talk about the two topics, “gainful purpose” and “residents”

Here is related knowledge from FamGuardian.org:

“A state Citizen has the right to travel on the public easements (public roads) without being registered. A statutory “U.S. citizen” does not. It is a privilege for a foreigner to travel in any of the several states.  If you are a statutory U.S. citizen, you are a foreigner in a constitutional state. The state legislators can require foreigners and people involved in commerce (chauffeurs, freight haulers) to be licensed, insured, and to have their vehicles registered. When you register your car, you turn over power of attorney to the state. At that point, it becomes a motor vehicle. If it is not registered then it is not a motor vehicle and there are no motor vehicle statutes to break. There are common law rules of the road. If you don’t cause an injury to anybody then you cannot be tried.

If your car is registered, the state effectively owns your car.  The state supplies a sticker to put on your license plate every time you re-register the motor vehicle. Look closely at the sticker on your plate right now. You may be surprised to see that it says “OFFICIAL USE ONLY”.(Note: In some states, they do not use stickers on the plate) You may have seen municipal vehicles that have signs on them saying “OFFICIAL USE ONLY” on them but why does yours? You do not own your car. You may have a Certificate of Title but you probably do not have the certificate of origin. You are leasing the state’s vehicle by paying the yearly registration fee. Because you are using their equipment, they can make rules up on how it can be used. If you break a rule, such as driving without a seatbelt, you have broken the contract and an administrative procedure will make you pay the penalty. A state Citizen must be able to explain to the police officers why they are not required to have the usual paperwork that most people have. They should carry copies of affidavits and other paperwork in their car. The state Citizen should also be prepared to go to traffic court and explain it to the judge.”

George and the Invisible Contracts

George Mercier offers his view on invisible contracts, on the license, and using ‘the king’s’ highway:

“Yes, an unknown and invisible Highway Contract was actually in effect when I was driving around without a License in effect; a contract was in effect that my legal Patriot mentors had specifically and adamantly told me did not exist (since I was not using the Highways for a Commercial purpose and my Driver’s License did not exist). But the Patriot advisors were point-blank wrong, and the contract did exist, as I will explain later; and the contract was invisible.” Read more in Invisible Contracts (long book, all online, and see the license part towards the end)

It comes down to this:

When they pull you over and ask for thy name, the correct answer is: “My given name is Jane. My family name is Smith.” Never ever connect them, because that is the name they gave to the corporate fiction.

This is why the microprint on checks reads “Authorized Signature” because you are authorized to sign for this JANE SMITH corporation.

So the living woman can travel, if the woman states that she is living and existing as a woman and NOT AS A PERSON/CORPORATION.

Corporations need licenses to do anything.

A living man or woman has the freedom to engage in business without restraint.

As for speeding tickets

This is an excerpt from this

Video of a man traveling in his conveyance yet stopped by the policy officers. He held his ground and emphasized the following:

Walking vs Acting; Driving vs Traveling; Is thou getting paid!

if someone is using a car, they are traveling. If someone is paid to drive someone or something around, they are driving. Driving is an occupation. A processional task.

If a policy officer pulls someone over, the first question is may I see a driver’s license. The answer is me is not driving. Question the premise!

Just imagine if a policy/police office-r knocked on your door and said you need a license to clean your bathtub. Because the officer is assuming thy is running a business without a license. Wouldn’t that be odd! Well it’s just as odd to accuse thou of driving if it’s pretty evident thou is not moving people or things for hire!

Excerpt from the brilliant site, Living in the Private.

However, if you “register” a motor-powered conveyance it becomes a “vehicle”, subject to all the commercial traffic codes, rules and regulations (and penalties). You become a commercial transport operator, involved in the transportation of goods or passengers for hire, compensation, or profit. This is because a de jure public state has the delegated power of the private people to create, by legalisation, fictional entities for the purpose of commerce, and therefore the state has a right and duty to regulate its corporate franchises when they are used on the public highways for commercial gain. In short, the state controls its creations.

Read more at Living in the Private

When stopped outside of one’s car, the policies officers will ask for ID-entity to know if thou is acting as a person.

29 comments on “Traveling versus driving – no license needed (video proof)”