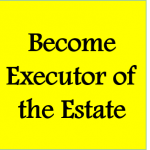 Everyone must choose their proper citizenship.

All those who wish to retain their birthright [should] gather together and begin operating your County and State on the Land, known as Washington State, not “State of Washington”.

Once this process is completed and your claim is received, posted on the public record of the probate court, and you have your certified copy of the action, you are the recognized Executor of your own ESTATE trust. You really always were the lawful Entitlement Holder — the rats just “misunderstood on purpose” in order to defraud you and control your assets.

Make it known – Living in the Private

A Claim of Right
Any living man/woman can make a written “Claim of Right” as evidence of their living standing. Such a claim can include evidence of life such as a thumbprint, witnessed in a living jurisdiction by a Justice of the Peace.

Get red-ink stamp pad on Amazon.

This “rebuts the presumption” that you are in “joinder” to a dead legal “person” NAME, and according to the Cestui Que Vie Act 1666, section IV, ‘If the supposed dead Man proves to be alive, then the Title is revested.’ In short, all your Rights and Properties are restored.

Obviously, a “Claim of Right” should be made known. It can be published anywhere, or served to any official, such as an Attorney-General with instructions to correct your status/standing in all governmental matters. But do not expect others to immediately acknowledge your living standing – the important thing is that YOU KNOW WHO/WHAT YOU ARE. (source site)

Message from a reader

I’ve recorded an Affidavit of Status and notice proclaiming I am no longer all of those things they presume us to be (dead, abandoned, minor, etc)

Those are recorded in the county I live.