Why protest a city curfew or mandatory schooling if it does not apply to you? Are you protesting the laws of a city in another country, such as Germany?

The people do not know that State Citizens are different from Federal citizens.

The people do not know that in most affairs, the federal government cannot interfere with state governments and state citizens.

The words ‘United States’ can mean more than one thing. The united States (plural) are the 50 Union States. The ‘United States’ (singular) is all federal territory such as Puerto Rico, Guam, and other territories, and sometimes also District of Columbia. 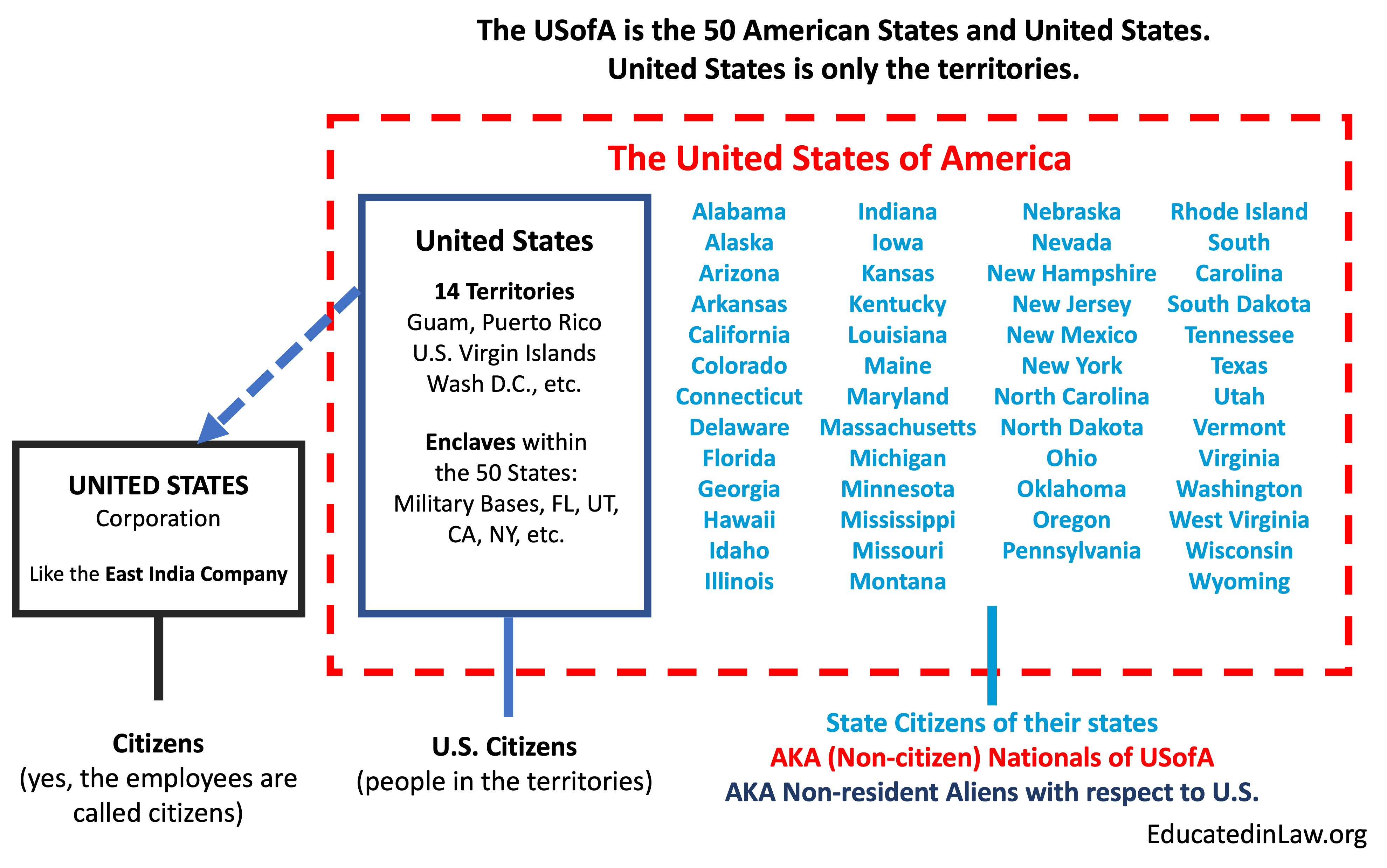 The States are states, as in nation-states. They are sovereign, meaning they manage their own affairs. In the late 1700s, the states agreed to create and join a confederation and called it ‘The United States of America’; they didn’t call it ‘United States’. This confederation was created to handle common needs such as dealing with other nations and declaring war.

‘The United States of America’ is like a homeowner’s association. Homeowners do not combine together to create one big home. They instead delegate specific duties to the association.

The States later agreed agreed to the Northwest Ordinance, which allowed the federal government, known as ‘United States in congress assembled’, or ‘United States’ (for short) to manage the Northwest territories, which sat adjacent to the existing States. The federal government was given control over the territories until a territory’s population increased to the point where it would become a State, and at that point would be sovereign, like the other states. (Read text of ordinance)

The people of these territories are called U.S. citizens. If thou does not live in a territory, thou is not a U.S. citizen.

[Please note, the site 1215.org recommends using the word ‘people’ not ‘citizen’. Also, Obama, in his farewell address, referred to citizens as office holders, which may imply citizen can also mean someone working for the federal government. I must rebut that presumption.]

The myth is that United States (in congress assembled) has ‘municipal‘ power over the State governments and State Citizens. Another myth is that federal authorities can overrule state authorities in all affairs. The federal government pushes this myth because the federal office holders want more power.

It gets more complicated. The federal government has gained power (jurisdiction) over State Citizens by convincing them to claim they are federal (U.S.) citizens. Federal citizens are U.S. citizens, and they are people such as those living on Puerto Rico, which is an ‘unincorporated territory‘ of United States.

People born in Puerto Rico and other U.S. territories are U.S. citizens.  They have to follow all the federal laws. In return, United States promises to protect them.

The 14th Amendment created a new set of federal citizens. The amendment made the freed slaves ‘citizens of the United States’ (and also the state wherein they ‘reside’).

The 13th Amendment freed the enslaved people, who then were political refugees. Most or all of the States of the Union would not naturalize them as State Citizens. The 14th Amendment gave them the same status of people in the territories.

The key mistake people of the States make is that when asked if they are U.S. citizens, they say ‘yes’. By claiming to be a U.S. citizen, they agree to allow ‘United States’ (the federal government) to have municipal and complete power over them. For example, State Citizens of Colorado, at the time of this writing, may use cannabis (marijuana) but if they claim to be U.S. citizens then they must follow federal law, which says cannabis is illegal.

When USA outlawed alcohol via prohibition, a constitutional amendment was needed. However, when drugs were made illegal, why wasn’t an amendment necessary? Because State Citizens had already been tricked into thinking they were Federal citizens. The statutes making drugs illegal only applied to Federal Citizens. State Citizens allowed, and continue to allow, the statutes to be applied to them. (Note I don’t advocate mind-altering drugs aside from chocolate.)

The U.S.A. passport application proves there are two types of citizens. The passport is available to U.S. citizens and non-citizen Nationals; the latter group being State Citizens. See auspassport4ed.com.

What we think are States of the Union are in most situations either corporations set up by the State Governments or subdivisions of the Federal government.  These new entities were set up after the war in the mid-1800s. Instead of Iowa, the Union State, suddenly people were seeing buildings, signs, and letters that said ‘State of Iowa’. Note the ‘State of…” portion. Regardless, these ‘State of’ entities are inferior to the federal government.

What happened to Iowa and the other Union States? Well, I assume they are practically dormant. There’s an opportunity here for thee, dear reader!

The next piece of the puzzle is that federal citizens living in a Union State are ‘resident aliens‘ or, for short, ‘residents‘. This means that a true State Citizen of Ohio, who says he is a U.S. citizen is then considered a ‘resident’ (alien) in his own state! He gave up his rights as a State Citizen.

Thou might rebut the labels ‘resident‘ and ‘U.S. citizen‘ but what about ‘U.S. person‘? Don’t allow that one to stick either. ‘Person’ is short for persona and can mean many types of entities such as corporations, trusts, etc.

A U.S. person, like a U.S. citizen, is subject to (controlled by) United States (the federal government). As noted that makes complete sense that someone living in a United States territory would be subject to the federal government, as laid out in the Northwest Ordinance, it should come as no surprise that corporations, aka persons or personas, created in the territories, would be called U.S. persons and would be subject to federal rules.

In many cases, statutes are written to control persons; even on the state level. Part of the reason may be that State Citizens are not subject to (under the jurisdiction of) the ‘State of Iowa’ and other similar federal subdivisions. But ‘persons/personas are subject.

In a real Union States, the people follow common law, which is don’t hurt another man/woman and don’t commit fraud, for the most part. In most cases it’s not even written down because it’s commonly known.

Now it is entirely possible for a Union State, one that is not dormant, to be onerous, and have more restrictions and more taxes than those imposed by the federal government upon its federal citizens. It might be better to live in Puerto Rico than New York.

It’s worth noting that in a final presidential speech by Obama, he referred to the title of ‘citizen’ as “the most important office in the democracy. Citizen. Citizen.” Also note that he said ‘democracy’, whereas The United States of America is a republic. This means that the speech was not even for the people of The U.S.A.. It was for the federal citizens, the U.S. citizens. He was speaking the people of Puerto Rico and other territories!

The U.S. Government printing office explains how to refer to the natives of the States. The forms are  Alabamian, Louisianian, Ohioan, Alaskan, Mainer, Oklahoman, and more.  One can probably refer to all of them as Americans.

When a man is born, the man has a given name and a family name, such as john of the mclean family. Someone up to no-good, creates a trust or corporation that pairs the given and family name into an all caps version JOHN MCLEAN and calls the first part the ‘first name’ and the second part the ‘last name’. 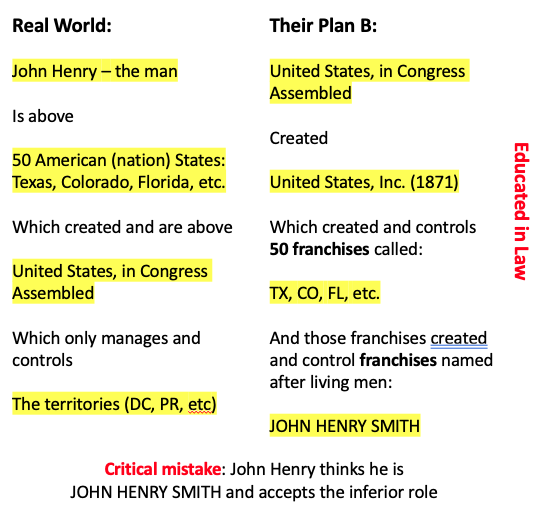 Many court cases involve the federal corporation its subcorporation. A ‘summons’ is sent to the living man, and he sees that it is ‘addressed’ to a name that seems very much like his name but is in all caps. Not knowing the difference, he accepts and acts on the letter, shows up to court, and when asked if he is JOHN MCLEAN, he mistakenly says ‘yes.’ This creates joinder between the corporate person and the living man. See more at Secret to Winning at Court. and Living in the Private.

How does one affirm one’s status as a State Citizen?

How does one maintain one’s status as a State Citizen?

Most federal statutes would not apply to thee. Only that which I think is published in the federal register and has implementing regulations can apply to the people of the States. All other statutes apply to the U.S. citizens, such as the people of Puerto Rico and other territories, and likely descendants of formerly enslaved people.

How does thou fully know the concepts on this page? Explain it to someone else or write thy own explanation.

The key part of this swindle is that the schools teach you one meaning of words, whereas the police and courts use another meaning. To you, citizen means someone in country. To them, citizen means office holder! You must rebut this presumption; meaning tell them it’s not so!

You only have the rights you claim – a Roman maxim. Claim your rights as a State Citizen, one of the people, and you will be good.

This site provides lots of knowledge about this topic, often content written by others.

The first thing to know is there is a lot to learn. It is like learning a new language. Even a sentence or paragraph will be challenging if most of the words are new. Be patient.

You need to realize that “you” is used as plural. That’s why the question is “Are you so-and-so?” “Are” is plural, as in “they are” “we are” etc They are really asking if thou is the agent representing the all caps name on the birth certificate. The agent and the corporation. So thou must use thou and make is singular. Is thou following this?

Also, thou needs to know that words are used to deceive. They spell words differently but the sound is the same. Birth vs. Berth. Soul vs. Sole. The words put you under a spell, that’s why it’s called spelling. Witches wear black robes and so do so-called judges.

Also, this has been going on for ages. The prior method used the Church and baptism to steal thou’s birthright. Listen to this video about how the Vatican actually does give life after death, meaning death of the name and title thou is born with, but then thou is tricked into taking the baptized name created and controlled by the Church. However, the Bible supposedly explains how one can get out of this mess, in parables.

Scroll Up
We use tracking cookies to analyze website traffic and display advertising. By continuing to use the site, you agree to our use of cookies.OKRead more