I need travel letters not a port-pass. I’m traveling, not shipping goods.

It occurs to me that state citizens need travel papers, not the port-pass/pass-port.

A port-pass/pass-port is for commerce: for shipping from one port to another.

Here’s a comment from Quora.com about how there supposedly used to be portpasses but now supposedly the portpass for people is different. I think not. We’re using portpasses is the same way they have always been used: supposedly for commerce.

“And there were actually documents called ‘passports’, or more literally ‘passe-ports’ which allowed merchants to enter and leave ports for the purpose of trade (back when trade was closely controlled by nations through guilds and Royal charters). But those were quite different from the citizen passports of today.” (Quora.com source)

Whereas, Travel papers are for men and women traveling from one (nation) state to another.

We have been duped into getting port-passes so they can pretend we’re engaged in commerce and can then control us with statutes.

What are we supposedly shipping? Our bodies. Years ago, I read that we’re considered ‘self-loading luggage‘.

That the word/phrase passport came from the French passeport is another example of keeping the French word to confuse us. If passport is based on the french word passe port then we need to flip the words when translating to English; hence we get port-pass.

Here’s a description of travel papers from the United States (The Territories) website, whereas state citizens would reach out to their own states.

Another quora.com sums up what a portpass really is – a means to affirm who I am.

All the passport really does is confirm that the holder is a citizen/national of the issuing country. It’s basically just official identification. Other countries MAY choose to allow a bearer entry, either with a visa or without. But that’s their call. A passport holder may be denied entry into any country for any (or no) reason — except their own country. (Quora.com source)

Maybe I just need photo-document or card from either my current state or home state and have that apostilled. That would show who i am and would have international weight.

Also note that passports did not come into general usage until around the First World War. Prior to this, people traveled with some kind of letter of introduction from a king, government official or other important person, which is kind of what a passport is even today really — a letter of introduction from the government of the issuing country. Or they traveled with nothing. (Quora.com source)

I’m thinking we would get travel papers from our state. Each American state, such as Ohio and Georgia, is a nation-state and each have their own secretary of state who can confirm the validity of papers and the details on them via either apostille or authentication. Apostille is for traveling to countries that are part of the Hague treaty. Authentication is for other countries.

Here are the details from the South Dakota Secretary of State. 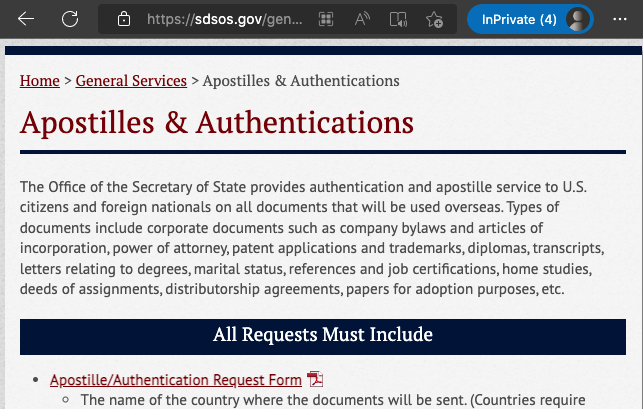 That each of the 50 states can certify documents in a way that is accepted world-wide reinforces the point that each state is a country — a nation-state.

We’ve all seen the 1930s fascism movies where people are stopped on the street and forced to show ‘their papers’. Clearly, travel papers preceded the port-pass/passports.

I’ve done a lot of research on the getting a port-pass/pass-port as a state citizen, not a 14th Amendment U.S. citizen. That’s an important step to update one’s status in the files/database of the Secretary of State for the United States (meaning the territories). I don’t want them to think I’m a U.S. citizen.

Going to United States (the territories) is like asking Canada to give me a port-pass. They’re wondering why I am contacting them!

I am wondering what papers I would get apostilled or authenticated. Maybe I need to ask them for a travel letter that guarantees my safe, unobstructed entry back into any of the 50 states.

A portpass/passport is just a travel document

Passport means a travel document issued under the authority of the Secretary of State attesting to the identity and nationality of the bearer.

Question about ID-entity on Quora.com

On Quora, someone asked:

“How did people prove their citizenship before passports existed?”

That is a simple: The governmental body in the area of residence usually had a record.

But in rare cases that they did not, often the family would have a record of being in the area for a significant amount of time. You have to remember that during those times, people did not travel much. So it made sense that such documents and records were located near where the subject or citizen resided.

Even in the US, the records were kept in the city of residence. This was evident during the Great San Fransisco Fire/Earthquake. Where alot of Chinese Immigrants straight up gain citizenship because the city lost their records. (source)

For this reason, I need to update the county recorder that I reached the age of majority and correct the record that my mom was unwed and abandoned me.

Deception through words and their government schools

Getting back to the port-pass/passport, their trick to bring us into commerce is similar to the driver and person trick.

Similarly, they deceived us into requesting a passport/port-pass. Part of the trick is to simply reverse the words to hide that it’s a port pass for commerce. Like the word understand is really stand under.

For this reason, I want to get travel papers from my (nation) state’s secretary of state, not from United States (the territories).

3 comments on “I need travel letters not a port-pass. I’m traveling, not shipping goods.”