What country am i from? i already said my (nation) state.

When filling out forms, i usually get frustrated because they are geared to U.S. Citizens rather than State Citizens. When it comes to the Country field, i don’t see any of the 50 united States. Today, i realize the Country field is either redundant or immaterial, because the form should end with the State field. My state is my ‘country’.

I don’t have any idea what ‘country’ means, aside from meaning ‘country music’ or ‘let’s go out to the country’ or maybe ‘back-country trails’.

The country field should be optional.

A search for ‘country’ in a dictionary of legal terms, shows no results, at least in this instance. i take this to mean the term ‘country’ is not material to legal discussions. 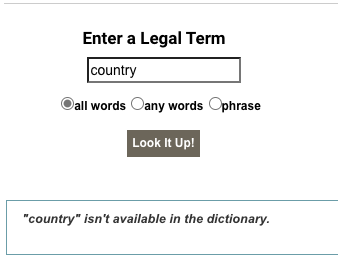 That same dictionary does define the term ‘state’.

n. 1) the federal or state government and any of its departments, agencies or components (such as a city, county or board). 2) any of the 50 states comprising the United States. 3) a nation’s government. See term on law.com.

Even a search in definitions, the field on the right, does not show ‘country’ as a word in the results. See below. 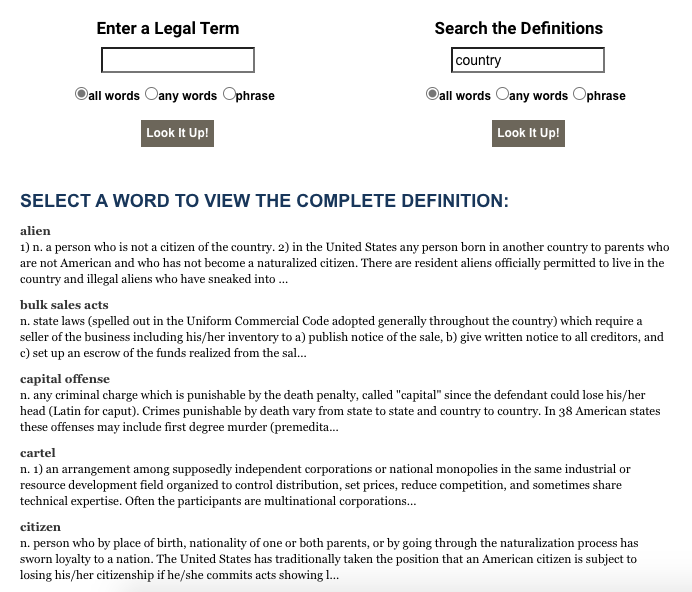 But, as I wrote previously, if the country field is required, and I don’t see any of the 50 American states, well then I guess I can pick any of the others because my state is not listed. I would never choose United States, since that is the territories, where people have privileges, not rights. And I want to choose a non-Hague country