The unsworn declaration directions in the U.S. code show that U.S. or United States is a federal corporation or the federal gov’t “in congress assembled”. It’s an entity that manages certain things for the 50 states, that are collectively called The United of America, not United States.

Here are the sworn statement directions. Notice only the first mentions U.S. of A.

Wherever, under any law of the United States or under any rule, regulation, order, or requirement made pursuant to law, any matter is required or permitted to be supported, evidenced, established, or proved by the sworn declaration, verification, certificate, statement, oath, or affidavit, in writing of the person making the same (other than a deposition, or an oath of office, or an oath required to be taken before a specified official other than a notary public), such matter may, with like force and effect, be supported, evidenced, established, or proved by the unsworn declaration, certificate, verification, or statement, in writing of such person which is subscribed by him, as true under penalty of perjury, and dated, in substantially the following form:

Without the United States means one is not working for/in the federal government, therefore one must reference U.S.of A. to give context.

Side point is that supposedly no one should ‘swear’. Never ‘swear’ on the bible as that is blasphemy against their rule book and immediately may place thee in contempt of court. In this case, it’s noteworthy that they are unsworn declarations and perfectly acceptable. In fact, swearing may make them unacceptable, for the reason already stated.

Option #2 above applies to the dark blue box, whereas the light blue states is where one would use Option #1. 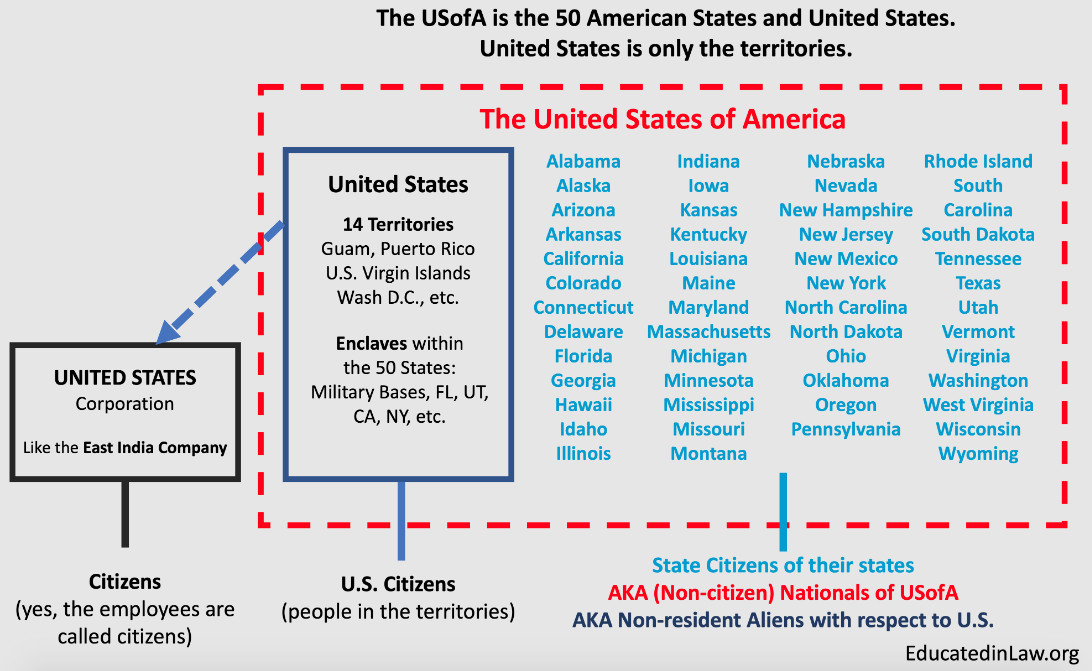 Postage rate is two cents within and between the states

Note, see this page explaining the postage rate without united states is two cents per ounce; I use four cents for the letter, as shown below.

For a great introduction to the fact that thou likely lives without United States, see these six PDFs.