In a famous tax case (Brushaber), a man from New York describes himself as a citizen of New York. After the case, the Treasury Department, in an official memo, refers to him as a nonresident alien. I am not bringing this up for tax reasons. I am bringing this up for the most important reason of knowing one’s political status.

Here is a portion of Brushaber’s petition, which states, “Frank R. Brushaber, a citizen of the State of New York…” 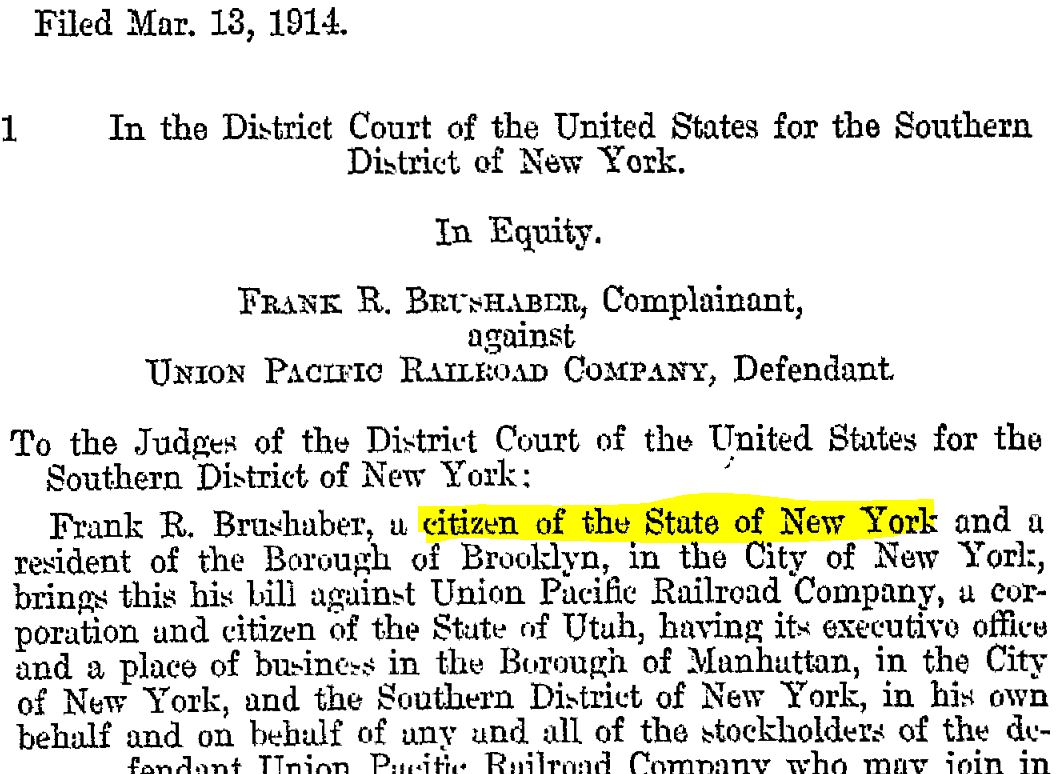 Here is a portion of Treasury Decision 2313 describing him as a nonresident alien:

“Under the decision of the Supreme Court of the United States in the case of Brushaber v. Union Pacific Railway [sic] Co., decided January 24, 1916, it is hereby held that income accruing to nonresident aliens in the form of interest from the bonds and dividends on the stock of domestic corporations is subject to the income tax imposed by the act of October 3, 1913.” See TD2313

I think this is for two reasons:

I embrace the label ‘nonresident alien‘ and ‘citizen of [my state]‘ when talking to officials from the federal jurisdiction. I am just like Brushaber. I am not a U.S. Citizen.

Please note, the Treasury Decision refers to domestic corporations, and domestic, in this case, means federal land, not one of the states in the union. Family Guardian notes the railroad was a corporation chartered in the federal Territory of Utah before it became a State.  As a territory, Utah was part of the federal United States [singular], and  as such, was a “domestic corporation” or “federal corporation” at the time it was formed.

Granted, Brushaber, who called himself a citizen of New York, can call himself whatever he wants and that does not make it so. However, since he did this in a brief to the Supreme Court, it likely was correct.

Brushaber also says he is a resident of the Borough of Brooklyn, and I am under the impression that saying one is a resident places one into the federal jurisdiction. However, maybe by first stating he is a citizen of the State of New York, using the word ‘resident’ has less significance.

See this interesting point, similar to my main point above, from an untitled book about taxes:

Under Amendment 14 a new concept of residing arose. It would seem that, as citizens of the United States [singular] [not the 50 states], all of the new kind of citizens living away from the political jurisdiction of the United States would have continued to be aliens, as to the state in which they “resided.” However, the 14th Amendment also made them citizens of that state – but continued to call them “residents” thereof. The Amendment does not apply to the sov’n citizen.

Side point: The 1040NR is federal tax form for nonresident aliens.

Here are more points from NoThanksIRS:

A recent NoThanksIRS posts reminded me about Treasury Decision 2313:

@NothanksIRS: See also: Treasury Decision 2313, based on SCOTUS case Brushaber v Union Pacific Railroad. TD 2313 refers to American national Frank Brushaber as an example of a “nonresident alien” for income tax purposes. If Brushaber was a nonresident alien, why can’t ANY American be one?

The correct vocalization is Brew–shay–ber. Hat tip to LostHorizons for this.

Just in case, thou is not following all of this, it may help to know that U.S.ofA. is a union, not a nation-state. It’s a country, alright, but only in the sense of a body of land, as in the country versus the city. U.S. of A. is union of states (nation-states) that formed the U.S.ofA to manage about 17 tasks. The people in the states are state citizens, while the people in the territories managed by U.S.ofA are called federal citizens or U.S. citizens. See The United States is separate from the fifty states.

Have a thought? Think out loud and think through an idea by posting a comment.

2 comments on “Citizen of New York described as Nonresident Alien”