It’s a miracle!! Richard Werner, an economist and professor, explains how banks really work. They don’t take deposits and they don’t lend money.

A summary and full transcript appears below the video! I typed it out because it’s so important. (Hat tip to @notporc for providing the new video.)

Banks are being thought of intermediaries, but this not really what’s happening. Banks are creators of the money supply.

I produced the first empirical studies to prove that [banks create money out of thin air].

So what is a deposit? A deposit is not actually a deposit. It’s not a bailment. And it’s not held in custody.

At law, the word deposit is meaningless. The law courts and various judgements have made it very clear if you give your money to a bank even though it’s called a deposit, this money is simply a loan to the bank. So there is no such thing as deposit. It’s a loan at a bank.

So banks borrow from the public. So that much we’ve established.

So you say. OK. Don’t confuse me with all that legalese.

I want a loan. Fine, here’s the loan contract. Here’s the offer letter. And you sign. At law, it’s very clear, you have issued a security. Namely a promissory note. And the bank is going to purchase that. That’s what’s happening.

What the bank is doing is very different from what it presents to the public that it’s doing.

How does this fit together? So you say fine, the bank purchases my promissory note, but how do I get my money? This is a loan. I don’t care about the details. I want the money. The bank will say you’ll find it in your account with us. That would be technically correct. If they say, we’ll transfer it to your account, that’s wrong because no money is transferred, at all, from anywhere inside the bank or outside the bank. Why? Because what we call a deposit, is simply the bank’s record of its debt to the public. Now it also owes you money [for the promissory note] and its record of the money it owes you is what you think you’re getting as money [as a loan]. And that’s all it is.

That is how the banks create the money supply. The money supply consists to 97 percent of bank deposits and these are created out of nothing by banks when they lend. Because they invent fictitious customer deposits. Why? They simply restate, slightly incorrectly in accounting terms – what is an accounts payable liability arising from the loan contract having purchased your promissory note – as a customer deposit. But nobody has deposited any money.

I wonder how the FCA [Financial Conduct Authority] deals with this because in the financial sector you’re not supposed to mislead your customers.

In essence, if I followed it correctly, here’s what happens.

Deposits: Customers lend money to the banks, and that becomes an asset to the bank. The bank then creates an account (payable) showing how much the bank owes the customer. The account that I think is mine, is really a bookkeeping entry. It’s an accounts payable; but the bank calls it an account for short. [Hat tip to Stop the Pirates]

Loans: A customer completes a bank loan application that is really a promissory note. A note has value, since someone is promising to pay an amount in the future. The note becomes an Asset on the bank’s books. On the Liabilities side of the bank’s balance sheet, the bank adds an accounts payable [Learn accounting!]. That accounts payable is the account used by the customer to access the so-called loan.

Note that the bank does not place the funds into the customer’s existing account. The bank creates a new account and I am saying that this is really an accounts payable.

They say they placed money into the account, but really it’s just a ledger entry. And what this all means, my friends, is that we are passing around ledger entries. Or at least that’s the way I see it based on Richard Werner’s points above and much thinking since.

The bank never actually pays for the promissory note. It promises to pay in the future, and the bank can prove that (in a way) by showing the accounts payable showing the bank plans to pay it at some point.

I complete a loan application. As I said, this is really a promise to pay (let’s say) $200,000. The bank agrees to buy this note from me, and does the steps noted above. I initiated the promise.

Let’s add another level. There is no money. This is true because I have not paid that $200,000. I have only promised to pay it. The Federal Reserve Notes are the ledger entries of the banks and that is what we use to trade. Those notes, I think, are currency, not money. Yes, this may be technical, but it could be significant.

Winston Shrout has said that we’ve been taught to see everything backwards, in terms of banking, with debits being credits, and credits being debits. That the loan application is the asset fits in with his theory. [This video with Winston might have this statement.]

Seriously, get the accounting book linked above, so you really know double-entry book-keeping.

Wait, there’s more. When people are charged with a crime, they have counts against them. Tell me…are those really accounts payables? Not sure. Still have to ponder this.

Chart from Living in the Private

Decipher it with this table from Living in the Private 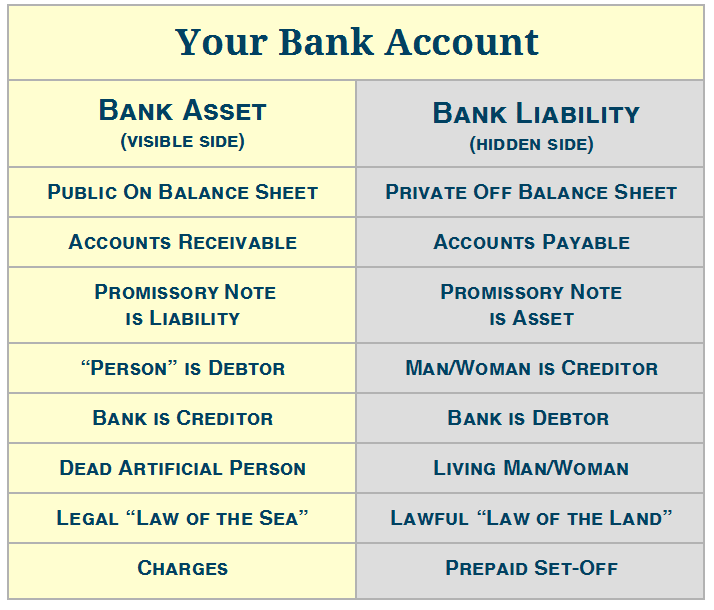 Read more at Living in the Private: Thou funded thy loan

It’s possible the word bank comes from the bank of a river or waterway. The bank of a waterway directs the flow of water, it does not hold anything. This could be the real reason banks don’t lend money or take deposits. Mentioning in case it helps us see this all more clearly.

Ask for your note back!

I think people should ask for the return of their loan ‘application’ after paying off the ‘loan” since the loan application is really an IOU. An IOU should be returned if the man/woman who wrote the note follows pays off the note/IOU. The goal would be to reduce the quantity of dollars in circulation, as this would increase the value of all other dollars in circulation. It would be dollar deflation, which is good.

Please post a comment below if you ask for your note/application back. I may do this for a school loan years ago.

When you sign a promissory note to create the mortgage with a bank to buy your house, at
closing, they have already sold your note to the warehousing institution. The warehousing
institution brought money into the bank when they bought the note. At closing, they take the
money and closes out the account on one side. The bank forgot to tell you that you don’t have a
liability on their receivable side any more.