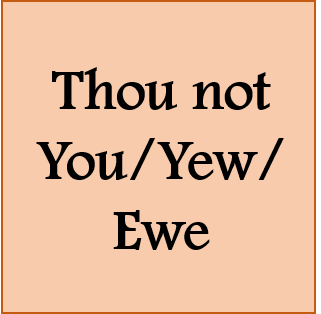 In legal settings, the word “you” may mean a plural entity at all times, and not a singular entity at any time.

This may be because the courts want thou to be both a man and the representative of a corporation — two things, not one.

Simply looking at the conjugation of the verb ‘to be’ shows something is not right. ‘You’ is paired with ‘are’, while ‘are’ is usually paired with the commonly plural pronouns such as ‘we are’, ‘(plural) you are’, and ‘they are’.

We should instead be saying ‘thou is’.

[update] Below I show the conjugation of ‘to be’ in French. There is in fact a different conjugation for ‘thou is’ and ‘you are’.

In English class, we’re taught that the conjugations of “you” singular and “you” plural are the same, whereas in French and Spanish, they differ.

Listen to Karl Lentz talk claim the word ‘you’ is plural in this video.

You might be a homonym for Yew, a tree. The fourth definition for ‘yew’ is the evergreen tree, of the genus Taxus, or its branches as a symbol of sorrow, death, or resurrection. Well this fits in with all the other death references, such as good mourning or ‘a wake’ and the fact that priests where black and the court issues a ‘summons’ to call up the dead.

Perhaps the word You is a lingual equivalent of the French verb Vous. You. Vous. You. Vous. They sound similar. They use so much Latin and French their courts; this would be another French word. The problem is the average man thinks its the singular You. The average man mistakenly agrees to be both himself and represent the person.

Some say you is a homonym for Ewe, a sheep.

Better than using “you,” would be to use “thou,” as is still done by some communities. The conjugation would be similar to the conjugation for He/She, such as “Thou is” like “He is.”

Notice that “thou” begins with “t” as does the French “Tu” and the Spanish “Tú.”

Bill Turner brings up the use of ‘you’. There is even more to this topic.