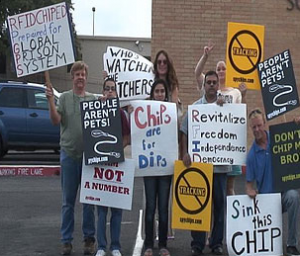 People in San Antonio protested having tracking chips in student ID cards. Administrators sold it as a revenue generator since it WILL increase attendance in first-period classes and schools are paid by the day to teach only students present in the first period. The protests couldn’t stop the RFID chips but people continue to argue against the idea.

The ACLU failed to pass California legislation that would have required parental consent before a student had to carry an RFID-enabled device.

A California pre-school used $50,000 of a $160,000 federal Head Start technology grant to tag students. The chips sit in the pocket of a sweater handed out each day.

Would you believe that millions of sentient beings already wear tracking chips? Sheep and cows and many other animals have been tagged for years. That was allowed to happened so our rulers have moved on to humans.

Libertarian politicians would end the mandatory tax money used to fund government schools and allow parents to send their children to any school or no school. Church and state were separated to prevent government officials from forcing beliefs on citizens. School, rather than church, is where most people now learn and we need to update our core approaches by separating school from state.

We will not only have education freedom, we will have educational diversity, with new, unique schools popping up everywhere, ones with curriculums that change with the needs of the markets.