Obama to require “schooling” until 18 or graduation

In his state of the union address, Obama says he wants states to require people to remain in high school until they graduate or turn 18. 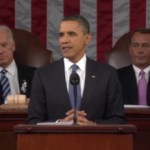 “We also know that when students don’t walk away from their education, more of them walk the stage to get their diploma. When students are not allowed to drop out, they do better. So tonight, I am proposing that every state — every state — requires that all students stay in high school until they graduate or turn 18.” (see entire transcript)

Is this the change people were looking for? Obama not only can imprison people in Guantanamo without a trial, he now wants to tighten the informal prison system known as government schooling.

The federal government cannot require this, so it makes it a condition of federal education funding. Some states may refuse the funding for financial reasons, since the federal grant rarely covers the entire cost and states must provide the rest.

You cannot escape this requirement, but you can reduce your time in this system by passing the General Educational Development tests.

Vote for politicians who will end the government’s involvement in education, which forces people to attend until 16 and possibly now 18, takes their money for tuition, teaches them subjects that many don’t want or need, and makes many of them hate learning.

See transcript of State of the Union.

2 comments on “Obama to require “schooling” until 18 or graduation”