Drowsy at school? Ask for a later start time. 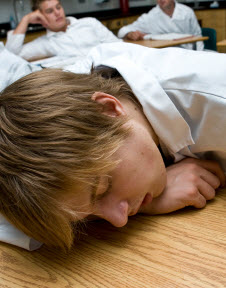 Some Â schools have moved their start times to later in the morning and students are now more alert and less prone to arguing.

“In one of the most recent studies, published last month in the Archives of Pediatric & Adolescent Medicine, Owens and colleagues found that, after a change in start time from 8 to 8:30 a.m., students at a small, private New England high school reported fewer depressed feelings (a shift from 65.8% to 45%), better moods (from 84% reporting irritated and annoyed feelings to 62.6%); and less sleepiness during the day. (Before the shift, 69.1% of students said they rarely or never got a good night’s sleep compared with 33.7% after the shift, for example.)”

Just 30 more minutes of sleep can improve the entire day. If you can’t home school yourself, at least make mandatory schooling less onerous by asking for changes at your school:

Some parents may argue the earlier start times will prevent them from arriving at work by the normal start of the work day at 9:00 a.m. Â These parents could negotiate later start times with their employers, so their children don’t need to wake up unnecessarily early and trudge through their day on inadequate rest.

Another approach would be to get your school to restrict the amount of homework teachers can assign so you can go to sleep earlier. As noted in other posts, people with full-time jobs don’t usually have “homework”. They do their work during the day, then go home and relax and spend time with their families and friends. If a teacher believes students should do work on their own, let the teacher allocate time in class for that work. Half or two thirds of the class could be for instruction, and the rest for self-study. Either way, less work done at home would allow students to get to bed earlier.

Read a related story: Freedom at lunchtime! Students do what they want.